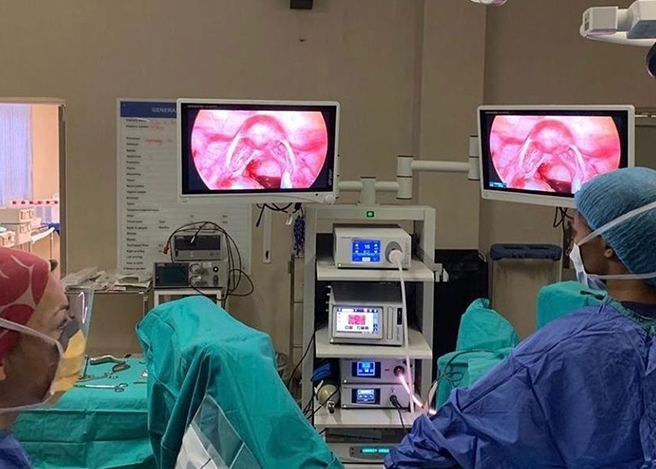 Women of reproductive age suffer from endometriosis. This age begins at teenagers to women in their 40s and it usually comes with painful and heavy periods. It can also be genetic. If the pain is severe to a point of it interfering with your daily activities or requires you to take painkillers excessively, it is not normal and could be endometriosis.

Endometriosis is usually diagnosed on laparoscopy (operation looking with the camera inside of the tummy) and treated with hormones or surgery. It most commonly involves your ovaries, fallopian tubes and the tissue lining your pelvis. During Endometriosis, the displaced endometrial cells stick to your pelvic walls and the surfaces of your pelvic organs, such as your bladder, ovaries, and rectum. They continue to grow, thicken and bleed throughout your menstrual cycle.

Endometriosis is diagnosed based on history, clinical examination, detailed pelvic ultrasound, occasionally MRI scan.
In some cases, laparoscopy is necessary to diagnose and assess the severity of endometriosis. Laparoscopy is keyhole surgery. You can read about laparoscopy here.

The symptoms of endometriosis can vary from very mild to very severe, although the severity of your pain does not always indicate the degree of the condition.

The primary symptom of endometriosis is pelvic pain, often associated with your menstrual period. Women with endometriosis typically describe menstrual pain that’s far worse than normal. Other common signs may include:

Symptoms are likely to be cyclical as it is a chronic condition. Beyond the physical, it can also interfere with psychological wellbeing.

What is the treatment?

Treatment will vary from woman to woman and is often determined by the patient’s priorities. For instance, in the case of a woman who is planning to try and fall pregnant soon, none of the hormonal treatments would be suitable as they either act as a contraceptive or halt the menstrual cycle.

The type of treatment should be decided in partnership between the patient and the healthcare professional. The decision should depend on several factors:

We do not recommend any particular treatment for endometriosis, but support patients seeking treatment options appropriate to their circumstances. The options are:

These are treatments that are used to act on the endometriosis and stop its growth. They either put the woman into a state of pseudo-pregnancy or pseudo-menopause. (Pseudo means simulated or artificial – both states are reversed when the patient has stopped taking the hormones.)

In addition, testosterone derivatives are occasionally used to mimic the male hormonal state; these drugs are generally synthetic hormones. While not all of the hormonal drugs used to treat endometriosis are licensed as a contraceptive, they all have a contraceptive effect, so are not used if the patient is trying to become pregnant.

All of the hormonal drugs carry side effects and are equally effective as treatments for endometriosis, so it’s often the side effects that will dictate the choice of drug.

Pregnancy is characterised by higher levels of progesterone, thus taking progestagens (the synthetic form of progesterone) mimics the state of pregnancy. During pregnancy, the endometrium is thin and also inactive.

GnRH analogues are a form of the naturally occurring GnRH, which is produced in a part of the brain called the hypothalamus. GnRH analogues stop the production of the hormones FSH and LH. The ovaries switch off and temporarily stop producing eggs and the hormone oestrogen.

Gestrinone are derivatives of the male hormone, testosterone. They lower oestrogen levels which directly switches off the growth of the endometrium (lining of the womb).

COCPs are tablets containing synthetic oestrogen and progestagen (female hormones). The combination of these hormones in the pill is similar to that in pregnancy, causing the menstrual cycle to stop, hence the symptoms of endometriosis being reduced.
The pill is commonly used to treat endometriosis before a definite diagnosis as most women who take it do not suffer from side effects. It can also be taken safely for many years. The pill can be taken continuously (without a monthly break) to avoid bleeding.

Although there is limited data on its use to treat endometriosis, there are a few studies that have assessed the pill’s effectiveness. Based on the side effects of each treatment it was concluded that the pill may be preferable as an overall treatment and has the advantage that it can be safely continued long-term until menopause in fit and healthy, non-smoking women.

Progestagens as treatment for Endometriosis

View our full list of all Medical Procedure fees.